Natalia Diamante Bryant is the first child of Kobe and Vanessa Bryant, born in January 2003. Natalie sisters are Gianna, Bianka Bella Bryant, and Capri, but unfortunately, Gianna passed away in 2020 along with their father, Kobe Bryant. Continue reading as we explain more about the Biography Of Natalia Diamante Bryant

Natalia attended Sage Hill High School in Los Angeles, California, in America. Natalie’s younger sister Gianna played basketball while Natalia plays volleyball where she is currently a volleyball player for Mamba Sports Academy. Natalie is yet to play professionally. She played as the middle hitter in her high school’s girl’s volleyball team, which she herself said she loves.

Natalia’s father and grandfather were professional basketballers, who are legends in their rights. Natalie’s sister Gianna also followed their paths by playing basketball and played for her middle-school team until her unfortunate death. On January 26, 2020, Kobe, and her 13-year-old baby sister Gianna met their untimely unfortunate death in a helicopter accident in California, United States. 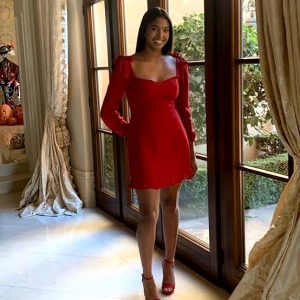 Natalia, with no doubt, was born into a family of basketball players, Natalia loves playing volleyball, despite her family basketball history, Natalie confirms she does not have a passion for basketball but prefers volleyball, cause it gives her joy.

Natalia was a volleyball player for her high school at Sage Hill, where she became really good at the game in her sophomore year and helped her team win their second straight title which she was proud of. Natalie currently plays volleyball for Mamba Sports Academy as earlier mentioned above.

Natalia’s father’s death, Kobe Bryant came as a big shock to the world as it was untimely and unexpected. Kobe and his daughter Gianna with 7 other people were on their way to Thousand Oaks, California for a basketball game, when they met their untimely unfortunate death.

ALSO READ  The Most Seasoned Pentecostal church in Nigeria 2021

The world couldn’t help but solace with his family for the big loss. Kobe and his daughter were laid to rest on February 7th, 2020, after a private service held at Pacific View Memorial Park in Corona del Mar, CA.

Natalia has a promising career in volleyball which does come as a surprise cause many thought she will pursue her father’s career and grandfather career as a professional basketball player. It would be nice to also let you know that she is extremely beautiful and loving.

you want to see more beautiful pictures of Natalia Diamante Bryant you can go and follow her on Instagram where she has about 1.7 million followers. You will get a lot of good posts from following her on her social media pages.

Natalia Diamante Bryant is one of the daughter’s of late icon Kobe Bryant and has a promising career as a volleyball player, yes you heard right, she is not following the footsteps of her father and grandfather but do promise to be a legend as her father Kobe Bryant.

YOU MAY HAVE MISSED