A new Instagram video made by Nigerian Actor Victor Osuagwu Shows a moment he was lamenting about how his late mother has been appearing to him in his dreams asking him to re bury her after Obi Cubana buried his mother.

The Actor said that Since Obi Cubana finished his mother’s burial, he has been seeing her mother in the dream. 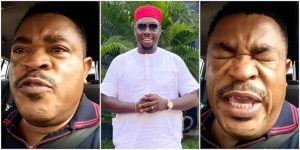 He also said that it’s when Obi Cubana’s Mother went to the land of the dead that’s when her mother started asking for reburial.

Watch the complete video below.

ALSO READ  Man Shows Off the bundle of money he picked from Obi Cubana Mother's Burial (Video)
Share this...