First of all, you need to understand what the word “Military” and “Paramilitary” means. Let’s start with the military.

The simple difference is the the military is meant to fight war, that is protecting the whole country from any danger coming from outside the country while the Paramilitary always focus on the affairs of the country internally, which means they protect the citizens and maintain the law of the country. The above explanation is the basic difference between them. Now let’s explain further. 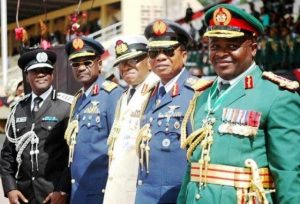 More Difference between Military And Paramilitary

Military are also called the Armed forces as they are the ones in charge of protecting the Country from external forces, the members of the military includes the Army, Navy or Marine and the Air Force. Military are forces under Defence. They can also be deployed to other internal conflict if it supercede the Paramilitary or to support the Paramilitary.

Paramilitary can also be described as A group of civilians who are trained and organized in a military way, but they are not the military. They are trained in a way they only operate in internal operations. Always deployed to maintain peace among the people. The Paramilitary are always given a task of internal security. Sometimes if need arises they may be deployed under the military in some cases of internal conflict.
Though during war time, they can also assist the military. In some countries, their paramilitary agencies may be different from others.

In Nigeria, the Paramilitary agencies includes

How to join Special Forces In Nigeria

Ranks in the Nigerian Navy And Their Salaries 2021

How To Join The Nigerian Army School